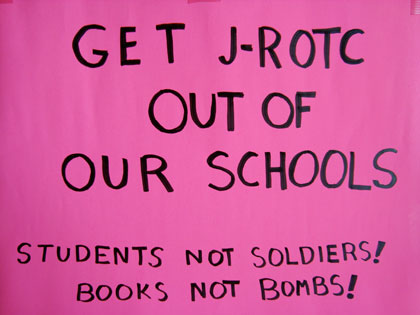 Oh, how were we challenged Thursday, June 5 in Brooklyn! The park surrounding Brooklyn Borough Hall and the Court Building was saturated with folks attending Brooklyn Day, a pro-Atlantic Yards rally, sponsored by the Forest City Ratner Corporation, a NYC real estate developer with a taste for using eminent domain for their own gain. A reported 3500 were in attendance with many bussed-in (union members and senior citizens), although the crowd was far more interested in a free lunch than Frank Gehrey’s ‘vision’. (Note to Forest City Ratner Corp: the next time you stage one of these extravaganzas, try to order enough food. Hungry people are cranky people.)

When we finally found each other, we relegated ourselves to a place somewhat away from the crowd, and set up our “information table” at the foot of the statue of another dubious achiever, the ‘great discoverer of our country,” Christopher Columbus. The noise, constant cacophony of many decibels was unnerving and almost unbearable — the unanimous winner for truly ear-shattering rhetoric most certainly had to be awarded to Brooklyn Borough President Marty Markowitz.

In spite of all, we were determined to apprise folks about NYC taxes supporting military curriculum in our high schools. Some people found it “shocking” that, just as school budgets were being cut, tax money was supporting JROTC. One gentleman questioned whether the New York City Council had any power to effect change, was encouraged to ask his council person’s representative, did so, and reported that City Council can effect change. Connie, our colleague from Brooklyn for Peace, brought along material for distribution including “Some Objections to JROTC” from California’s Project on Youth and Non-Military Opportunities, which provided effective “talking points” and was well received. 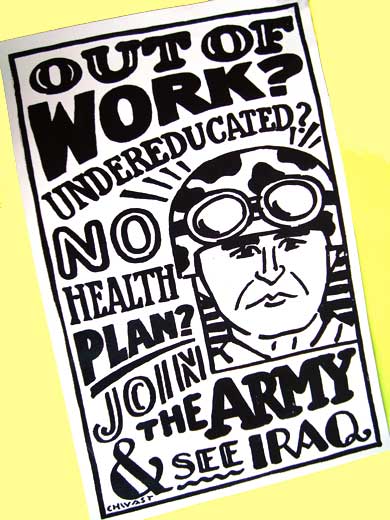 People often engaged us in lengthy conversation, occasionally preventing us from reaching more people.* A group of teenagers found it to be unbelievable that they could call an elected representative’s office and, even with our encouragement and peer daring, didn’t engage in doing so. A young woman with three children, who works for the New York City Board of Education, took flyers and printed materials saying that she was going to bring them to a teacher’s meeting in her school. She requested additional information to be sent and left her contact information. When a caller to City Councilperson Robert Jackson (Chair, Education Committee) requested a public hearing, she was informed that the office had received 46 calls requesting a public hearing on NYC taxes for JROTC and 6, from students, against a hearing (time frame was not stipulated but we are assuming that it was recent).

Owen and Maxie chalked messages on the sidewalk concerning our Phone-a-thon focus and the number of U.S. troop deaths in Iraq, 4091 to date. A counter-chalker wrote that we were liers however, it did not deter us. The Phone-a-thon was considered by all, worthwhile and a success.

*The Granny Peace Brigade & CodePink NYC need more volunteers to talk with folks who are interested in learning about “what’s going on” concerning U.S. militarism at home and abroad. The tax levy funds for JROTC seems to be a really “hot issue” and we need to spread the word with other peace groups, encouraging a City Council Public Hearing for full disclosure and hopefully, a change in policy. Soâ€¦

…JOIN US AT THE PHONE-A-THONS!

One thought on “Brooklyn: Say No To Junior ROTC”