Nine of us here today. It’s hot in the sun, but the terrible heat of earlier in the week has lifted. We set up a table in the shade of a tree. We’re ready to meet people as they come along, up from the subway or across the square during a lunch break. We have our quarter-sheets to hand out, giving people the facts and the numbers to call. 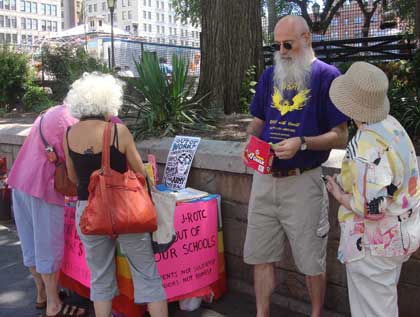 Beautifully lettered on his sidewalk billboard Owen has chalked:
4096 U.S. Soldiers Dead.
Call Congress: 800-828-0498
A note of tragedy
A note of hope

This is the week of the vote on the supplemental military funding bill. Our messages: No more $ for war. Diplomacy, not war with Iran. Impeach Bush There’s also our campaign to get the NYC City Council to hold hearings on the use of tax $ to fund JROTC classes in high schools.

Calls to representatives are our focus. We have encounters! We win a few and lose a few.

Caroline’s favorite: Amy, resting in the shade after a job interview. She’s new in town. Lives in Brooklyn. We look up her Congressional Rep in The League of Women Voters of NYC (lwvnyc.org) Directory “They Represent You.” It’s Jerrold Nadler. She calls the Congressional switchboard, asks for Nadler’s office and uses the cue card Caroline wears around her neck to pace her conversation with Nadler’s staffer. Amy’s used to relating to her representatives. She’s moved from Cleveland and Dennis Kucinich was her Congressman! She lived near his office and used to drop in. We agree, he’s our hero. Check out his latest heroic act, of defending the U.S. Constitution, 35 Articles of Impeachment for President Bush,and Vice-President Cheney. (Did you know? He wasn’t covered by any major news media) Read the scoop in Gore Vidal’s article at truthdig.

Heres Eva-Lee’s review of the day:
I got off to a good start with two phone calls right away and then didn’t get any more. Both callers said “Don’t fund the war” and “Impeach both Bush and Cheney.” They had taken the time to use the League of Women Voters NYC book to look up their representatives. A lot of people walked by with their noses in the air, but there were others who thanked us for being there, even though they didn’t stop and make the call. One man took flyers promising to call later. He walked about 20 yards away, turned and came back with tears in his eyes. “I can’t tell you how much it means to me that you are out here doing this,” he said. “My son is in the navy.” He turned and walked away slowly. 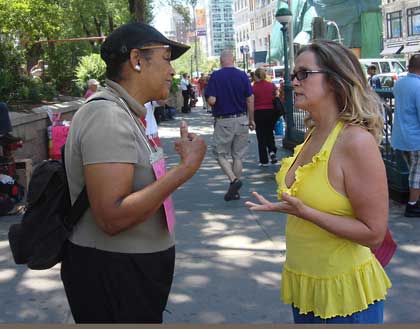 Barbara W had several intense conversations, and some were painful. Here’s how she sums it up: I believe that it is important to let those we encounter who say our military are killing only “the bad guys” (this was said!) or who see only a stereotyped Iraqi, know that there is, for example, the old head of a family who is scared out of his wits by the soldiers busting into his home in the middle of the night, the school principal who goes into his school to open the door for our soldiers and appears at the door “Middle East hospitality style” with the tray of tea. I sometimes hear myself quoting (to a person who approves of our entry into Iraq) the veteran Mejia who said at the Winter Soldier session earlier this year “We went across the ocean to brutalize a country that had done nothing to us.”

Phyllis reports:
I spoke with a woman from France, and then another, and a woman from Russia, all of them supporting us. Then a young man who was hawking coupons for discount membership at an Equinox exercise place. I asked if we could exchange flyers and he exclaimed, “You ladies are giving out more important things than I am. It’s really good.” He did take our flyer. In talking, I found out that he was not registered to vote, although he had been in the city for more than 6 months. I encouraged him to get registered and vote in the coming elections, and gave him a registration form.

Barbara H:
Maybe people should know about the opposition messages, i.e. “I like the war, we are winning, we’re safer, not many deaths now,” to let people know why we must be out there to speak to those who only get the Rush Limbaugh message.

Well, we’re not quitting. Check the calendar on the Granny Peace Brigade home page for the date and location of our next Phone-a-thon. Join us if you can. No cellphone, no problem.