The students were a very lively group of about 14 women and one man. Many of them were from other states and we told them how to reach their Congressional Representatives and Senators; one had already visited a congressional office in person. 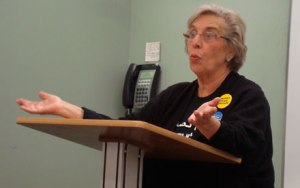 Carol Huston described the beginnings of the Granny Peace Brigade including the Times Square enlistment attempt, the trial and the gradual development of committees devoted to No Bases, Counter Recruitment and Legislation.

Representatives of the committees spoke: 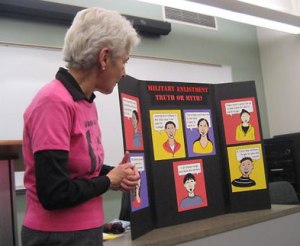 As we were wrapping up we were asked to sing, and we sang “Voters [God] Help America.” That got a big applause.

At the end of the presentation theater lovers came over to Vinie asking what she is appearing in, and she told them she was in a play now and also in rehearsals. One student gave Vinie her email so Vinie could send her the information about her current activities. Students were interested in Counter Recruitment, and they want to follow up – helping high school students to fill out basic forms, and use the internet to find financial aid programs. They also asked about more information on the two Israeli refuseniks that recently visited NYC.