WE MUST NEVER FORGET!

It was 65 years ago, August 6 and August 9, 1945, that the U.S. dropped nuclear bombs on the Japanese cities of Nagasaki and Hiroshima.  Commemorations of the atrocities were held in many cities around the world but, for the first time in history, a representative of the U.S. Ambassador John V. Roos, was present at the ceremony held in Hiroshima.  Unbelievable!

With President Obama calling for the elimination of nuclear weapons in Prague last year and his planned visit to Hiroshima and Nagasaki in November, a renewed hope for the abolition of nuclear weapons is in order.  Many of the country’s participating in the Nuclear Nonproliferation Treaty Review at the U.N. in May,  expressed their ardent desire for a nuclear-free world.

On Friday August 6, the Granny Peace Brigade and their friends gathered on the anniversary of these horrific acts of war, in Time Square.  We are committed to building a nuclear-free world and keeping alive the drive to secure one.  Hopefully those who saw our signs and banners, read our flyers, and engaged us in conversation will also work for the abolition of nuclear weapons, worldwide. 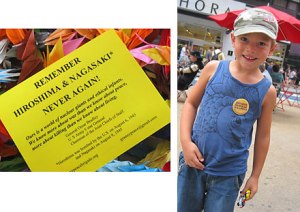 The countries with nuclear warheads are the U.S., Russia, China, France, the U.K. India, Pakistan, Israel, and North Korea.  But, the only country to deploy nuclear weapons is the United States of America.

Let us renew our commitment
to build a peaceful and just world.

2 thoughts on “REMEMBER HIROSHIMA AND NAGASAKI”