Yesterday evening there were at least two events that Granny Peace Brigade members wanted to attend. (Nothing new about that.) Since she hasn’t figured out yet how to be in two places at the same time, Bev went to the demo at the Federal Building – 26 Federal Plaza to protest FBI raids and harassment of antiwar activists in Chicago and Minneapolis.

Meanwhile, Barbara H, Joan P and I (our two-places-at-once skills aren’t so great either) tottered out to Brooklyn to join CodePink NY, Brooklyn for Peace and others for the Stolen Beauty AHAVA Boycott Campaign outside the Ricky’s store on Montague Street. 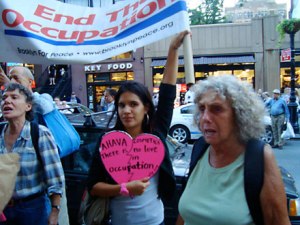 Counter demonstrators showed up at Ricky’s. 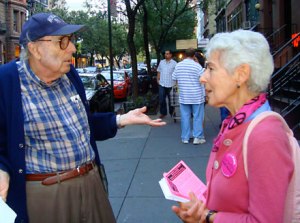 There was a lot of hollering. We had to chant really loud to compete with the noisy, ardent counter demonstrators. It was hard. It was tiring. Our voices started to give out. But we carried on.

As we were leaving one of the organizers suggested that next time we should have a sound permit.

Is using amplified sound to cope with noisy counter demonstrators a good idea?

This is a general question about street demos where we expect counter demonstrators. My concern is that by cranking up a sound system we might alienate the people we are trying to reach. Maybe we should work on having the best chants and songs (Corinne, Mercy — head’s up)…  and pack along some throat lozenges.

What do you think?

7 thoughts on “How to Cope With Noisy Counter Demonstrators?”