As the United Nations Conference on Climate Change meets in Warsaw, the Granny Peace Brigade (GPB) has joined an Amicus Brief (Friend of the Court) in support of five Youth Plaintiffs and their federal lawsuit of Atmospheric Trust Litigation (ATL).

Together with other organizations – Global Kids, Earth Guardians, 350.org, Boston Latin School Youth Climate Action Network,  Labor Network for Sustainability, HelpAge International and HelpAge USA – the Grannies are supporting these Youths and their appeal filed on May 23, 2013. 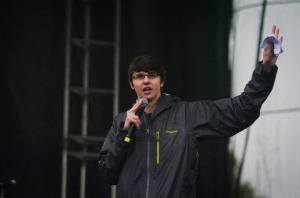 Alec Loorz, founder of Kids vs Global Warming and an activist since the age of 12, first filed a suit on May 4, 2011 against six U. S. agency defendants demanding “Climate Recovery Plans” to protect our climate system. Alec, the lead plaintiff, was 16 years old and joining him were 4 Youths in a legal action in the U.S. District Court in the Northern District of California.

In April 2012 the National Association of Manufacturers was granted defendant status in the case as “fossil fuel intervenors.”  On May 12, 2012 District Court Judge Robert Wilkins dismissed the Youth’s suit on the grounds that it was a legislative matter and not one for courts to decide.

In the fall of  2012 several Grannies met with Julia Olson, attorney and Executive Director of  Our Children’s Trust, a nonprofit organization working with youth around the country, and filmmaker Kelly Matheson, coordinator of a Trust campaign.  At that meeting the GPB was invited to join the case as a Friend of the Court, should an appeal be filed.  And it was filed on October 22, 2013.

The Youth Plaintiffs filed an amended complaint in the Court of Appeals for the District of Columbia Circuit.  It charges that irreparable harm to resources and loss of a habitable climate system is a breach of the Trust relationship between Youth and Government.  As such it is a breach of the Equal Protection Clause of the Constitution.  Youth’s claims are based on fundamental obligations of the government which are incapable of being displaced by legislation.

The GPB has now joined the appeal as Amicus Curiae, a Friend of the Court, with the following statement:

We Grannies stand for Peace.  The Granny Peace Brigade (“GPB”) formed in 2006 after 18 older women were found not guilty in a court of law of charges related to their actions opposing the Iraq War.  We stand for human rights and justice.  We oppose war and the violence of poverty and racism.  We are committed to the struggle to make a safe and peaceful world for all children and grandchildren everywhere.  From the perspective of our ages ranging between 67 and 98 years, we are witnesses to the drastic and dramatic climate changes taking place and feel it our responsibility to act on behalf of future generations.   We join with the plaintiffs.