August 26th is the 2nd day of the Democratic National Convention.
August 26th is the day the 19th amendment gave women the right to vote in 1920. August 26th has become known as Women’s Equality Day but what does equality mean in a world of endless war? What does equality mean in a world without peace for without peace there can be no development of the economic, social, political structures necessary for any true equality. Equality for millions to be bombed to death in Iraq? Equality to starve in the US, equality to be homeless in the US because that is the equality women and their families in the US face today because ten billion dollars a month is squandered in an illegal war and occupation of Iraq. 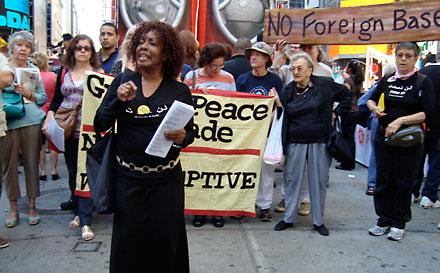 We grandmothers have marched, trekked, sat in, sat down, protested, demonstrated, by foot and by bus we trekked to ten different cities and eventually wound up in DC where we personally met with 100 senators urging, pleading, cajoling, asking them to end the war in Iraq and still the killing goes on. It is a false patriotism that waves a flag and lures over 4000 of our finest and bravest young men and women to their deaths.

That is why we of the Granny Peace Brigade march today with our Platform for Peace with our Planks that differ from the planks in Denver.

Five years of war is too much.
Five years is enough.