Dateline: NYC, March 18, 2009. Empty promises, inadequate protection, lousy pay, worse working conditions and forced participation in illegal and immoral acts — does OSHA know about the lousy deal the US Military gives our sons and daughters? Today the Granny Peace Brigade brought this deplorable situation into sharp focus when they rallied at Military Island in Times Square.

At high noon, civil liberties attorney and advocate, Norman Siegel, addressed the assembled crowd, followed by acclaimed actress and activist, Vinie Burrows, the ever-inspiring Reverend Billy, an impassioned young war resister, Matthis Chiroux, and Joan Wile, who delivered a statement from 94 year old GPB member, Marie Runyon. The formal remarks concluded with the Grannies and their supporters reading – in unison – their statement, in the form of an urgent message to President Obama.

Seven grannies, ranging in age from 60 to 90, were determined to insure any potential recruits had the benefit of their experience and wisdom. 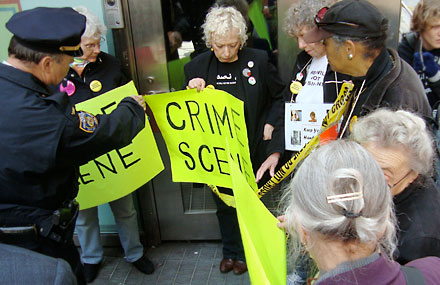 Unfortunately, the NYPD seemed to be uncomfortable with their mission. It took 17 uniformed police officers, several more of the ‘plain clothes’ variety, and a fleet of official NYPD vehicles* to arrest and remove the seven women. Taken to Manhattan South Precinct, Granny Peace Brigadiers were booked on charges of Disorderly Conduct, Trespassing, and Disobeying a Lawful Order. As of 8PM this evening, the seven women were still in police custody and had not been released. 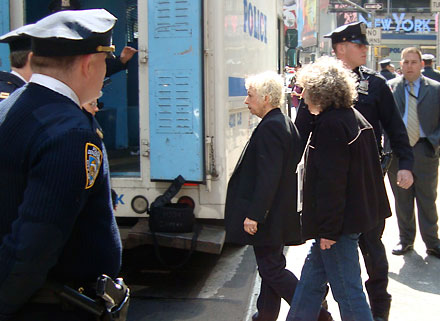 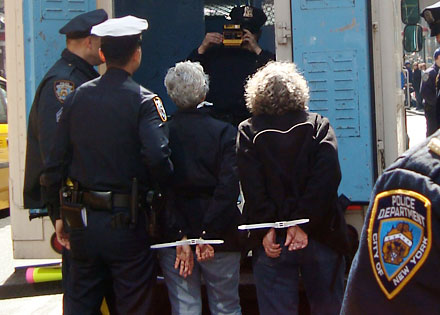 The recent revelations about the financial abuses of AIG caused an avalanche of outraged calls and emails to the White House and at the recent Madoff court hearing, Centre Street was jammed with irate citizens demanding restitution and redress. The media seems to have an insatiable appetite for these stories. However, tomorrow marks the seventh year we are sending our young men and women to fight in the illegal and immoral occupation of Iraq, and while our president promises to start drawing down troops in this arena, U.S. involvement in Afghanistan is escalating daily. Where are the news briefs about this awful situation? Where is the citizen outrage?

The US military actions in Iraq have cost the citizen of the United States in lives, futures and taxpayer dollars. There is a clear connection with our sagging economy and the obscene amounts of money squandered in Iraq.** One thing about us Grannies — we are a stubborn bunch.

As long as our government insists on continuing this insanity, we will be out there on the barricades for peace, connecting the dots and making sure attention is being paid. We will not go quietly. We refuse to be silent and we will not accept anything less than peace with justice.

One happy note — early today, while patrolling Penn Station, three members of the NYPD encountered a young woman in distress. The officers immediately came to her aid and assisted her in delivering a healthy baby boy. That is the kind of police action that the Granny Peace Brigade enthusiastically supports. Now lets all work together to ensure this new New Yorker — and all our children and grandchildren — can grow up in a world that values peace and protects the rights of all its citizens.

Stay tuned for more details when our Seven Sisters are released.

A heartfelt Granny shout-out to all our brothers and sisters who generously extended themselves to make to this action happen: Grandmothers Against the War, the Raging Grannies, Code Pink NYC, the War Resisters League, and United for Peace and Justice.

*no hybrid or fuel-efficient vehicles were part of the fleet.
** National Priorities Project, AFSC Cost of War, WRL Where Your Income Tax Money Really Goes

6 thoughts on “MARCH MADNESS: A PROTECTION RING OF 7 GRANNIES ARRESTED IN TIMES SQUARE”