Our signs say,
CALL YOUR CITY COUNCILPERSON !
NO TAX LEVY $ FOR MILITARY TRAINING
NO TO $2.4 MILLION TAX DOLLARS FOR JROTC IN NYC HIGH SCHOOLS

People are into conversation! We listen and learn. Just moved to town? Register to vote..here’s a form.

A very pregnant woman who just moved to Brooklyn tells Phyllis, “I’ll make a call. I don’t want my baby getting trained for the military in high school..”

Two young women with Eva-Lee: “Hey, this predatory recruitment needs to be stopped.”

Jenny recruits two other voters into making calls here and now. They want to know who represents them and she helps them look up their reps.

A BBC reporter down from Boston interviews Barbara H. about counter-recruitment actions.

A veteran from DeKalb Co., GA says they’re creating a U.S. Marines High School there. He’s not for it!! Hey, most U.S. voters aren’t for it. The majority are against the U.S. occupations of Iraq and Afghanistan. 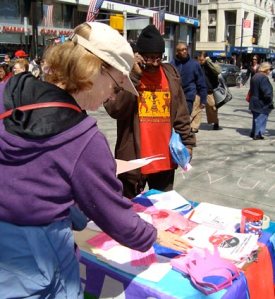 Edith’s guy says reduce conflict by having the US quit going all over the world imposing our will. Another guy was in Europe at 16 in ’44. He thought the J-ROTC is a good thing and claimed that his mother had signed to let him join. However, according to information from a reliable source, they only let kids who were 17 and 4 or 6 months go into the Army and then with their parent’s approval.

People are zooming in – conversation gets intense. Callers are getting through to City Council offices. Staffers are listening. We like to see first-time callers getting the attention voters deserve. A guy in Rosie Mendez’ office asked for info on our concerns. We should have name-dropped Betty Brassell!

Lillian P. and Australian visitors to NYC get acquainted. They’re going to read her book and she has an invitation to visit them down under! On the other side of the equator, a guy Lillian encounters smacks out with some backlash: “God Help America from people like you!”

We guess the school teacher from Sheepshead Bay summed up our position: “Hey, I’m glad to see you people on the street..since the inauguration I’ve been wondering where the peace movement went!”

Yes, we’re here. It’s about our grandchildren’s future. They need a good education, from pre-school right on up. Being taught to shoot and drive a helicopter doesn’t cut it. If we’re not manufacturing anything (except weapons) in the USA, all of our children need some super skills. Let’s put our $2 million tax levy dollars into college advisement in the high schools. That makes sense. 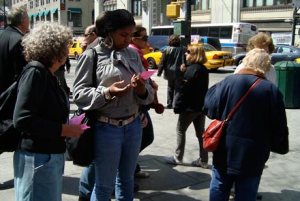 We like today’s connections and intensity. We feel most urgency from our African American and Latino brothers and sisters. One woman comments, “I see recruiter people standing outside the high school every day. It breaks my heart.” It’s a high five phone-a-thon.