It has been 66 years since the U.S. dropped nuclear bombs on the civilian populations of both Hiroshima and Nagasaki.  And now the people of Japan are suffering the results of the Fukushima Daiichi nuclear disaster.  Our question to everyone is, in the words of Pete Seeger, “When will we ever learn?”

On Friday, August 5, The Granny Peace Brigade (GPB) and supporters gathered at the Armed Forces Recruiting Station in Time Square to remember the horrendous crimes visited on Japan, August 6 and 9, 1945. 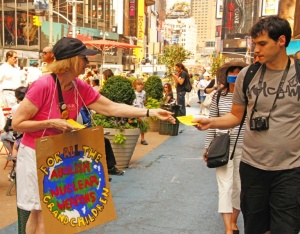 With our banner, signs, and flyers we hoped to encourage others to take time to recollect and perhaps engage in activities focusing on building a peaceful and just world.

Although there are several other countries with nuclear warheads (Russia, China, France, the U.K., India, Pakistan, Israel, North Korea), the U.S. is the only country to employ them.  The GPB is committed to the abolition of nuclear weapons and war, and works toward making the world a better place with justice and peace for all.

We, the people must rely on each other and work together to bring peace to the world.  In the words of Dwight D. Eisenhower (1890-1969),  “I like to believe that people in the long run are going to do more to promote peace than our governments. Indeed, I think that people want peace so much that one of these days governments had better get out of the way and let them have it.”

Let us renew our commitment
To build a peaceful and just world.