We returned recently from an eye-opening journey to Israel and the occupied Palestinian Territories. We went because of the troubling news coming from Gaza about collective punishment, because of images of a 300-mile wall of separation between Israelis and Palestinians, and perhaps most of all because of our desire to understand the nature of this occupation of Palestinian lands, the longest occupation in recent history, in place since the 1967 Israel-Palestine war.

We traveled with the Interfaith Peace Builders (IFPB, http://www.ifpb.org) and thirty US delegates, of various ages, religions, and occupations. We traveled mainly along the “Green Line,” which is not green at all but dusty and rather desolate. This line was the boundary between Israel and the West Bank created by the 1967 war. While this boundary remains very real to the Palestinians, it under-represents the division of land between Israelis and Palestinians. The sequence of maps in the figure shows that since 1967 continuous land confiscation east of the Green Line and west of the Jordan has markedly reduced the land remaining in Palestinian control. Whether taken by the military or by settlers, the remaining small and isolated parcels of land barely constitute a viable second state. 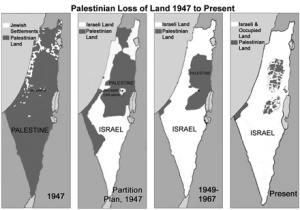