The people of the neighborhood were sympathetic to our survey, and those who participated did so with enthusiasm. One woman thought so highly of Ms. Gizmo that she started calling people who were waiting for a bus to come and do the survey. And I was pleasantly surprised when a woman who appeared on the scene turned out to be an old friend of mine.

You never know who you’re going to meet when you’re out with Ms. Gizmo. She gives out good vibes.
– Susan Goodman

It was at the end of a really good day at Lenox and 125th Street. And then two policemen came sauntering towards us. They didn’t seem to mind what we were doing and so I approached the one with a smile on his face and asked if he would like to participate. As usual, I had the 20 coins ready in my hand to give them quickly to those expressing any sort of interest. But, he quickly put his hand in his pocket and then with a bit of friendly “encouragement” from my side, he said I could put all the coins in for him. I asked where and he replied “All in jobs.” I asked if wanted to see the other choices and when he saw them, he changed his mind: “Half education, half jobs.” 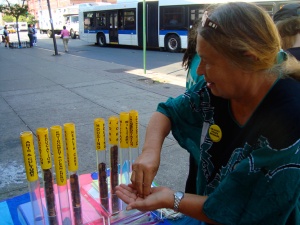 He watched what I did, and then sauntered off with his partner. In discussing this later, we realized that policemen are not allowed to participate in such activities directly,…but as we found out today, those interested in expressing their opinions do find a way to do so with Ms. Gizmo!
-Marty Rajandran

P.S.  Afterward, Edith, Eva-Lee, Marty and Susan G. had lunch and counted the pennies at a salad bar nearby.  The food there was good too.