Once a year
U pick a toy
One that’s good
For a little boy
So what do they think of your little son?
He oughta get a blaster gun?

When is it okay for kids to play with guns? Is it ever okay for kids to play with guns? And what do kids mean when they play with guns? Let’s look at the stories children tell as they point toy guns at each other. Two generations ago some of us grannies, with siblings and friends whiled away escaped-from-school afternoons playing cowboys and Indians. And a generation later when our kids were kids “World War Three” was played on the sidewalks of New York. The narratives came from stories adults were telling in newspapers, books, movies, songs, TV programs and advertising. These stories all served to steep one generation in racism and another in cold war paranoia. Guns were props. Some so were lovely gun belts you could find at the outdoorempire guide to gun belts. Shooting people was okay. The enemy changed with the times.

Today’s stories have morphed but children still play with guns and the message remains; shooting people is okay. Just ask the folks at the Toy Industry Association. Every year they hold a gala event where they give awards to the toy they think is best in several categories; toys for boys, for girls, for toddlers, science toys and more.

This year there were seven nominees in the best “Boy Toy” category, with several promoting violence, and the worst of the lot being the Nerf N-Strike Elite Hail-Fire Blaster (Ages: 8 years & up). According to Hazbro, the manufacturer, “Massive capacity and supreme speed combine to make this blaster the ultimate upgrade to any arsenal. Load up and dominate with the ultra-high-capacity Hail-Fire blaster!…It holds up to 8 clips, and delivers a semi-auto barrage of darts as fast as you can pull the trigger.”

OK, we know the Blaster shoots foam darts that can’t hurt anyone, but is it a good idea to inculcate kids with the idea that shooting people doesn’t do any lasting damage? And the rapid fire, multi-shot blaster is sooo much more exciting than cap guns ever were!

Somebody had to tell people in the toy industry that promoting toys like the Strike Elite Hail-Fire Blaster just wouldn’t do, so on February 9, the night of the Toy Industry Association awards ceremony at the Plaza Hotel in Manhattan, members of the Granny Peace Brigade were outside the Plaza greeting people as they arrived for the ceremony. We bestowed our message on the attendees with signs, songs and Valentine’s Day cards, and two days later we took those same signs, songs and Valentine’s Day cards to the Javits Center where the annual American International Toy Fair was underway. At the Plaza and again at the Javits Center many of the toy traders thanked us for our presence and for our message. One attendee from Europe told us about the “disgusting and terrible” toys on display at a toy fair he attended in Hong Kong. On his return to Europe he sent us these pictures he had taken at the Hong Kong toy fair. We have a global problem. 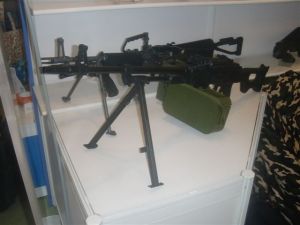 We have work to do.