We were back at our usual spot in front of the Recruiting Station on Lennox Ave/125th St. sharing information on the latest drone news that can affect NYC residents: the recent statements by Police Commissioner Bill Bratton who said “I’m supportive of the concept of drones, not only for the police but for public safety in general.” He is quoted as also saying: “The Mayor is supportive of it as are many members of the Council…” Is this why there were at least 10 officers at different times during our 1.5 hour action hovering around us; ensuring we did not block the entrance to the Recruiting station; forcing us to remove our posters from the wall? And what about the cameras on the back of the police car, parked in front of us….blocking the bus stops….just for us!? (Click on Photos for larger images.)

As we engaged with the public, this is clearly a subject that many have not given any consideration. However, as we discussed this possibility with them, it was increasingly clear that there is concern about this. Issues like where would such drones be used…..mostly likely in this (Harlem) area, but probably not in Wall Street where so many “criminals” hang out! 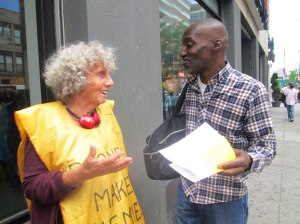 One resident felt that the police will not like drones, as it will also capture what they are doing! But generally, people felt that with cameras everywhere, there is enough surveillance….”we don’t need them peeking in our windows” as another resident said. But drone use may have another side as we watched one young man run down the street. Was the police car with the siren following him? Would a drone have been safer? And realizing that the neighborhood had a major police action against large gangs earlier this week, would this have been stopped sooner if drones were following the members around?

We urge a serious public discussion of the possibility of drone use by the Police force by the City Council, perhaps coming up from Community Board Meetings, and maybe even something on the next ballot. We see the use of drones in NYC as further infringing on our rights to privacy. And we definitely don’t want drones weaponized with rubber bullets, tear gas, real bullets, etc. Call your city council member and share your concerns with them directly!