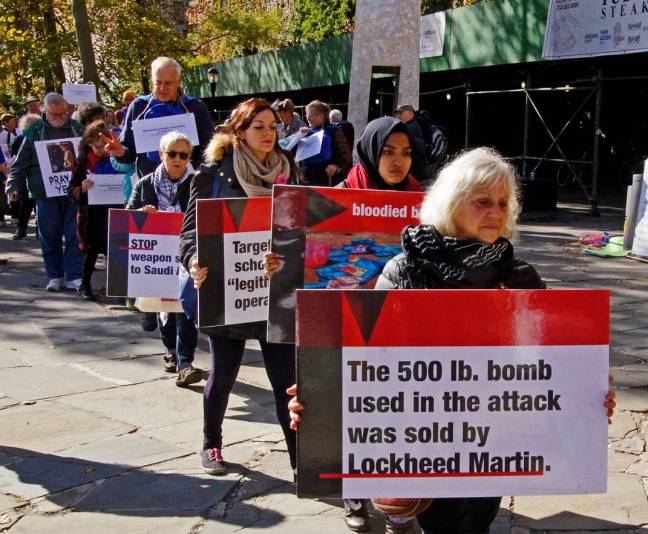 On March 22, 2015 Saudi Arabia launched a war against Yemen, a country now considered “the world’s worst humanitarian crisis,” according to the United Nations. Millions of people face starvation caused by Saudi blockades of port cities; cholera outbreaks from Saudi bombing of hospitals, water and sanitation systems; a rampant wave of destruction waged against the Yemeni people – all made possible by U.S. military support for the Saudis by providing weapons, mid-air refueling planes, and target logistics. Now in its 4th year the war rages on amid a political and criminal thicket of deception, cynicism and hypocrisy.

Kathy Kelly from Voices of Creative Nonviolence called for three days of protests at the United Nations and the U.S. and Saudi Missions, as well as the Saudi Consulate. The Granny Peace Brigade joined Catholic Workers, Veterans for Peace, War Resisters League, Peace Action, Code Pink, Know Drones, Grafton Peace Pagoda and others.

On the third day, Thursday, November 8th our group of 60-70 gathered at the Isaiah Wall on First Avenue and 43rd Street (“…they shall beat their swords into plowshares, and their spears into pruninghooks: nation shall not lift up sword against nation, neither shall they learn war any more.”). The solemn single file procession was led by anti-nuclear activist Jun-san Yasuda and Ayumi Temlock. Following were activists portraying Grieving Mothers holding children’s bodies, signs explaining to onlookers what we were commemorating. Nick Mottern’s mock drone accompanied us along First Avenue, past the U.S. Mission where two persons blocked the entrance, and on to 47th Street and Dag Hammarskjold Plaza, ending at Second Avenue, at the Saudi Consulate. There 25+ persons with blue backpacks for the dead school children risked arrest by blocking the entrances in an act of civil disobedience. The names were recited of the 44 Yemeni children killed in their school bus August 9th. The action ended with the NYPD informing everyone they would not be arrested, nor were the protesters at the U.S. mission. The horror of this religious-civil-tribal-resource war is such that no country wishes to draw attention to its role in it.

Nydia Leaf
for the GPB