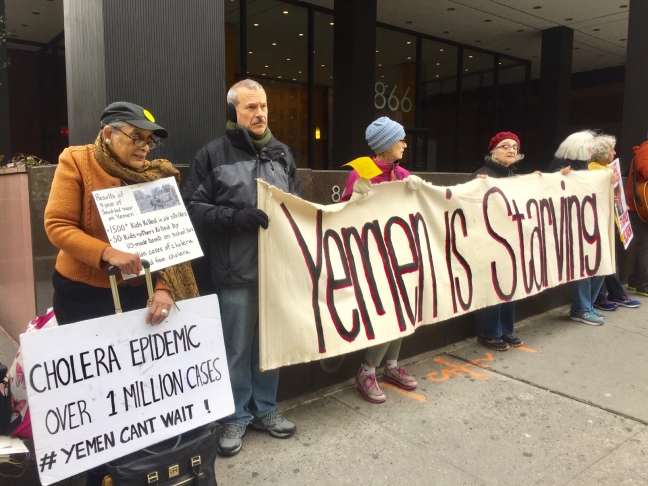 March 25, 2019 marked the beginning of the 5th year of the Saudi-led war on Yemen. The Granny Peace Brigade, together with friends including some from the Saturday Catholic Worker vigil for Yemen, gathered outside the NY Consulates of Saudi Arabia and Bahrain, one of the coalition partners of the Saudis in their war on Yemen, to call for an end to the the horrific war and to call upon the USA to end its support to the Saudis in this war which has been called an unconstitutional war by our Congress.

According to UNICEF, “Yemen is a living hell for children….Every 10 minutes a child dies from a preventable disease…” That would mean that around 144 children are dying per day and in 2019 that would mean already 12,000 children have died from preventable illness.

While the reasons for the war are complex, it began as a civil war with Saudi Arabia and a coalition of 9 countries eventually coming to the aid of the “recognized” government conducting over 18,000 air strikes and a blockade of ports of entry barring food, medicines and other needed supplies to the people of Yemen. The results have been disastrous for Yemen, with a population of around 30 million:
—85,000 children have died from malnutrition/starvation
—2 million children suffer from acute malnutrition
—1 million pregnant and lactating women suffer from malnutrition
—10 million suffer from extreme hunger
—Over 50,000 civilians killed (although UN confirms around 15,000)
—1.2 million cases of cholera reported, with over 2000 deaths (the largest outbreak ever reported)
—49% of health centers destroyed
—50% of the population no longer having access to safe water/sanitation due to the bombing campaign
—33% or around 4 million school age children not attending school as buildings destroyed or teachers unpaid for year upon year
The targeting of civilians, starvation as a weapon of war, the destruction of civilian infrastructure are all considered WAR CRIMES.

The USA, together with France, UK and Italy have helped arm the Saudis with fighter jets, missiles, bombs, other munitions. The US has even sold the Saudis cluster bombs, which have been banned globally. The USA has further provided re-fueling of Saudi bombers, although that was reportedly stopped as a result of Congressional pressure in 2018. However, US guidance in targeting, technical support and intelligence and according to some reports, special forces ground troops are still provided.

The US Senate has passed a resolution (Senate Res. 7-2019) condemning US action in Yemen, based on the US Constitution: only Congress can declare war, not the President. The resolution calls upon ending US support for the Saudi-led war.
It is expected to be voted on in the House of Representatives within the coming weeks…perhaps early April. And so we call upon you to call your member of the House of Representatives and urge them to vote on the Senate resolution as it is.

It’s time to end our endless wars; this war on the people of Yemen is particularly egregious as the USA is complicit in the WAR CRIMES being committed by Saudi Arabia. US-made bombs pieces have been found at sites of civilian deaths: weddings, funerals, and at the school bus which killed 50 children on a school outing. We also urge our Congress to end the sale of weapons to Saudi Arabia, which has violated our own laws, by using these weapons against civilians.