Toys should be fun for children and foster the development of life skills, including problem solving. There are many toys that can satisfy our children and grandchildren’s desire for excitement and adventure other than war toys that provoke fighting and winning by means of violence. We are in favor of fantasy and delight and against the militarization of our young people. For this reason the GPB began a campaign against war toys last year. The Toy Industry Association Fair, held in New York this February provided us with additional opportunity to address this concern.

The currently marketed G.I. Joe, manufactured by Hasbro is the archetype of war toys. 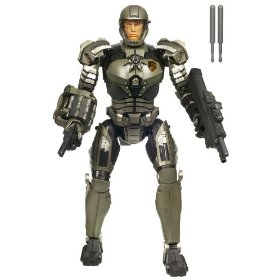 Hasbro was nominated for awards in two different categories at the Toy Industry Association awards banquet on Saturday evening at Pier 60, Chelsea Piers in NYC. The Granny Peace Brigade previously had written to Brian Goldner, CEO of Hasbro, requesting a meeting to discuss our concerns about G.I. Joe and war toys but had not received a reply. We, along with supporters including members of the Raging Grannies, went to Pier 60 to send a message: RETIRE G.I. JOE!

Hasbro Has Got To Know – G.I. Joe Must Go YouTube video

Initially, at the entrance to Pier 60, we held banners, sang, and distributed flyers to let the arriving attendees know we are troubled by the manufacture and distribution of war toys. In time, we marched through the Pier 60 garage in an attempt to get closer to the entrance of the banquet hall. This provided attendees greater exposure to our message as they disembarked from taxis and limousines to enter the gala! We were happy to be in, out of the wind and cold. 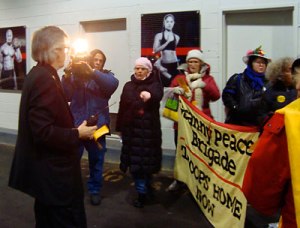 Were we asked to leave? You bet! Several times and by several different people. “This is private property!” Who owns the property? “The owners” of course. Members discussed our right to be there and the rest of us kept on singing, “Hasbro’s got to know G.I. Joe must go.” (download songs sheets from the Granny Peace Brigade “Songs” page.

Eventually the police showed up but we continued to sing and negotiate our space. Finally, when most of the attendees had already arrived, we slowly moved to the entrance of Pier 60…singing and chanting along the way. We continued to display our banners and sing while standing on the sidewalk adjacent to the pier entrance. A gentleman, who we were told was a supervisor of the area, commanded us to move across the street as “…this sidewalk becomes private property after sundown…from sundown to sunup it is private property.” We were to understand that it is only public during daylight. You can imagine how we related to that. The police asked us to move so that they could leave. We complied and moved across the street with our banners unfurled.

The following Monday, we went to the Toy Fair at the Jacob Javits Center to again get our message out.

With banners and singing, members distributed flyers to attendees and passers-by. We had an opportunity to talk with attendees about war toys and how they may affect children: desensitization to fighting, violence, war and killing. There were many interesting conversations and much positive feedback concerning our toy campaign. We also heard, “I love G.I. Joe!” on occasion.