The annual Toy Industry Association Fair is taking place inside the Javits Center as Edith, Susan, Bev, Joan P and I study song sheets and begin to sing on the sidewalk outside. Later we will be told the sidewalk we are standing on is private property. We will be told to go stand on the narrow strip behind us at the curb on 11th Avenue near 35th Street.

We are here to protest war toys and toys that celebrate violence — particularly the Toy-Of-The-Year winner in the boy toy category, Hasbro’s Stampede Blaster. The writing on the box speaks for the toy and for Hasbro.

Launch an all-out assault with the fully automatic Stampede ESCI. Unleash a storm of darts from the extended 18-dart clip, and reload in a hurry….

The people on the awards committee — what were they thinking? 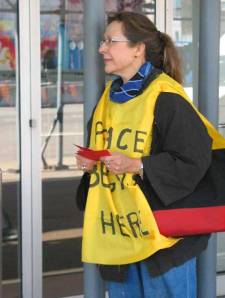 Kallyn hands out valentines – on public or private space? We sing, and sing and sing. With us is David Walllace who captured our message in this powerful video. Many, many thanks David.

Security tells us we are on private property. We sing.

Here’s a view of our spot from Google Maps. The Javits center roof is dark. The image was taken some time ago and does not show the scaffolding. The sidewalk is about as wide as two traffic lanes and we’re standing near the “C” in “Convention.”

The same view with the so-called private sidewalk in red and the public strip in green.

We’ve done what we came to do here and head north toward 41st Street where Hasbro has a separate exhibit. On the way we stop at the 37th Street entrance to the Javits Center where an even greater swath of sidewalk and roadway has been declared private.

We go in to a space where commercial connections are made. Some old time lyrics run through my head…

The public agora is closing down piece by piece. Every day more of the discourse, the exchange of ideas that makes a democracy vibrant and strong is taking place in spaces like this under corporate control.

We sing. People listen. The fair attendees seem to be divided into two camps; the people who dismiss us impatiently, and those that thank us enthusiastically.

On to Hasbro where… 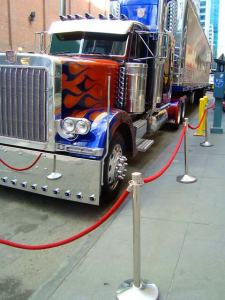 A piece of 41st Street has been made into a private museum for Hasbro, velvet ropes and all. The truck is promoting transformer toys.

The security guy on the right tells us “just don’t block the door.” Bev who does not slow down in the presence of security hangs a pass to the exhibit around her neck (yes we have one) and marches in. Blink your eyes and they’re throwing her out.

Whose streets? We have work to do.