Plenary sessions and workshops of the 2011 World Conference Against Atomic & Hydrogen Bombs took place at the Bunka Koryu Kaikai Hall.  The opening plenary began promptly at 2 p.m. and after preliminary welcome greetings and introductions, conference chairs were selected.  Among them was Corazon Fabros from the Philippines who led the victorious struggle to close the USA base at Subic Bay and is now engaged in the campaign to end the “Visiting” Forces Agreement. (She is barred entry to the USA.)

Buddhist monks fasting August 5 in the Hiroshima Peace Park prior to the memorial event honoring all the victims of the Uranium bomb dropped on August 5, 1945. With them is Nydia Leaf of the Granny Peace Brigade and Hisae Ogawa, founder of Code Pink/Osaka.
(Click on photos for larger images.)

The continuing shadow of Fukushima hung over the conference, especially with revelations in newly declassified documents of President Eisenhower and Secretary of State John Foster Dulles that the U.S. “sold” atomic power plants to Japan. An article in the July 24, 2011 Japan Times described the U.S. policy initiated in October 1954 to “remove the strong Japanese notion that atomic and nuclear energy is primarily destructive.”

Themes introduced were the joint Abolition of Nuclear Weapons and Power Plants, Hibakusha compensation, and future NPT (Treaty on the Non-Proliferation of Nuclear Weapons) Preparatory conferences, and papers presented at the conference sessions amplified these ideas.  Overseas presenters spoke of their solidarity and concern for the Japanese people in the aftermath of Fukushima.

The Children’s Peace Monument is a bronze statue of Sasaki Sadako, the twelve year old Hiroshima girl exposed to radiation in 1945 who died of leukemia in 1955.  She folded a  thousand origami cranes hoping it would bring her long life.

Detailing each delegate’s message would be repetitive. Instead here follows a broad list of the most trenchant points to help further our aim of sharing information:

–    The complacency of 25 years post-Chernobyl has been shattered by Fukushima and has shifted the balance in organizations from strictly anti-nuke to now encompass nuclear power plants.  The 442 nuclear plants in 29 countries produce 15% of total electricity needs.  An international non-violent struggle for complete energy transformation has already begun.

–    Nuclear Weapons abolition remains our most urgent task.  23,000 Nuclear Weapons exist and 2000 are maintained on a high alert status.  The technology is too complex to be mastered; thus “safety” is a myth.  Likewise the Cold War strategy of “Mutual Assured Deterrence” is now exposed as myth.

–    The 2015 NPT conference should be held in Hiroshima with significant progress to be made at the U.N. prep com meetings in 2012 and 2014; no progress has been made since last year’s NPT meetings, in particular, work towards a nuclear free zone in the Middle East.

–    The need for a Nuclear Weapons Convention is clearer now than ever before.  The Non-Aligned Movement in May 2011 proposed a high-level international conference “to identify ways and means of eliminating nuclear weapons.”

–    The peoples of Japan and Guam have been caught in the middle of geopolitics that compromises the safety of the entire world.  Peace and stability in Northeast Asia (China, Japan, Korea) is possible through regional cooperation.

–    It is important to create Nuclear Free Zones, especially in the Middle East.  Mayors For Peace, the world’s largest organization working to abolish Nuclear Weapons, has 5000 member cities representing nearly one billion people.

–    According to SIPRI (Stockholm International Peace Research Institute) annual military spending is $1.6 Trillion of which 100 Billion is for the nuclear industry.

–    The U.S. has violated the NPT by illegally deploying nuclear weapons on its European bases.  The German government was forced to admit that 20 U.S. nuclear bombs are deployed in Buchel.  Now Belgium, Germany, Luxembourg, The Netherlands and Norway have called on the U.S. to remove nuclear weapons from their territory.

–    U.S. bases – Because of two Marine bases located at Mt. Fuji, the site cannot be registered as a World Cultural Heritage site.   In the Philippines, the U.S. closed its Subic Bay in 1992 but left a heavily contaminated area with resultant cancers like leukemia and miscarriages.  This is a lesson for Japan to learn that it must stop hosting the USA.

–    The City of Kobe has banned the presence of U.S. nuclear warships and submarines.  Other cities in Japan should do likewise.

–    A strong call for No More Hibakusha.  Victims of Agent Orange should also be remembered.

–    Korean Hibakusha abroad should be entitled to the same welfare benefits and compensation as Japanese Hibakusha.  Likewise now for the new Hibakusha resulting from the Fukushima Daiichi plants.

–    Chernobyl in 1986 has left millions who suffer its consequences but facts are not available.  In 1959 a contract between the World Health Organization (WHO) and the International Atomic Energy Agency (IAEA) permits WHO release of information about radiation impact only after consultation with the IAEA.

–    Death tolls continue to climb in the Marshall Islands after the 1954 Hydrogen bomb (Bikini) test and nuclear claims for compensation and restitution meet with little or no response from the U.S.

–    Victims of the 193 tests conducted by France over a 30 year period (150 underground and 43 above) have struggled with the French government for compensation for tests in Polynesia and Algeria.  They have launched an Appeal for a United Nations conference to take up the issue of Nuclear Test sites around the world for cleaning, rehabilitating and developing of all regions so affected.

–    “Don’t send our Students to Battlefields.”   Education for Peace is essential and textbooks need to be monitored for their description of nuclear energy – “Renewable Energy Sources” are usually portrayed as insufficient to meet energy needs.

The message from Secretary General Ban Ki-Moon to the Conference, delivered by Sergio Duarte, U.N. High Representative for Disarmament Affairs, thanked Gensuikyo for its role in the work of disarmament.  Mr. Duarte called the gathering a “Collective Conscience” that must push for accountability and, while acknowledging the many obstacles as countries continue to modernize their arsenals, he expressed his gratitude for Gensuikyo’s contributions. 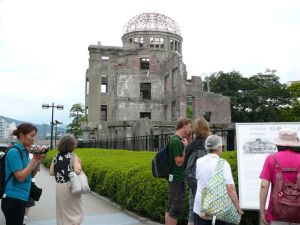 The Atomic Bomb Dome is a fragment of the only building purposely kept standing in Hiroshima, the Prefectural Industrial Promotion Hall,  2 km kilometers from the epicenter.

AUGUST 6 – Saturday –
HIROSHIMA PEACE MEMORIAL CEREMONY – 8 to 8:45 a.m.
As a U.S. citizen attending this solemn, formal commemoration, the event was very painful – it was the U.S. that unleashed this horror on the world and inflicted a nightmare of destruction on the people of Japan.  The Peace Park area was set with 12,000 chairs; escorts to seats done quietly with no frenzy; a program and a flower given to each person as they arrived; phalanxes of TV camera crews arrayed on the side; orchestras and choruses dressed all in white; the day was clear and hot and attendees were advised to drink water which was provided.  At eight o’clock the ceremony began with a dedication of the register of names of the victims, a brief address and then foreign dignitaries presenting wreaths at the cenotaph.  At 8:15 a.m. (the time when the bomb struck on August 6, 1945) a bell rang followed by silent prayer.  The Mayor of Hiroshima spoke.  Flocks of doves were released several times and a “Commitment to Peace” was read by the two 6th grade school children who had written it…their high voices sounding open and hopeful.  A Peace Song was sung and the ceremony closed.  We were invited to lay flowers at the monument where banks of Chrysanthemums had already been arranged.